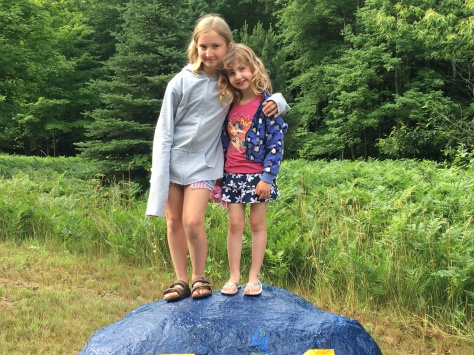 At bedtime a few nights ago, the girls were giggling and telling Joe, “Do it again, Daddy! Do it again!”

So Joe re-entered Neve’s room, stood at the foot of her bed, and starting crooning “Somewhere Over the Rainbow” like a jazz singer wannabe.

My brows hunched in full-puzzlement mode. This was what led Lily and Neve into hysterics?

But then Joe arrived at the song’s bridge, at which point he started jumping up and down, and his face, though still smiling, became more intense. It was as if Black Flag’s Henry Rollins suddenly appeared, pounding out iconic lyrics as angry thrash metal: “Someday I’ll wish upon a star and wake up where the clouds are far BEHIND MEEEEEEEEE!!!!!”

The girls both doubled over, laughing so hard their eyes watered.

And I thought, “Thank you, universe, for these crazy, crazy people.”

Because although I’m getting a steady flow of free-lance assignments – six months out from my blind-siding layoff – I’m still adrift and depressed more often than not.

These are the things fogging my brain daily: I’m lonely. I feel painfully dull and old – a used-up has-been at 45. I feel irrelevant, insecure, like I don’t matter anymore. I’m out of step with the “real world.” I don’t know what road to take to lead me out of this. I may have nothing else to contribute to the world. No one seems to want to hire me permanently for what I do, so reason would dictate that either A, I’m not as good at it as I thought, or B, the world no longer values the abilities that I do have, making me the human equivalent of a betamax.

Either way, the picture is bleak.

And seriously, journalism may be among the worst fields in which to experience a layoff, because you don’t just walk away and abstractly imagine someone assuming ownership over what had been, for more than a decade, your babies, in terms of your “beat.” You see that how each piece of what had once been your territory is parsed out to your former co-workers. This reality TV story goes to this former colleague; this movie theater renovation story goes to that one; this public art story ends up on this person’s desk, and Art Fair lands on someone else’s.

Though you worked your tail off, it sure seems like, not only do they not even need to replace you, but your pithy work is parsed out with a snap of the fingers. So the message is sent: You’re not special. You didn’t need to be the one to write that story. See? They’re getting along just fine without you, Jenn.

But then each evening, when the girls finish up at their day-camps, I get to re-calibrate back to the “evening Jenn” that I know, and was familiar with, from before the layoff.

We eat dinner together; the girls play, or they spontaneously come up with some project, pulling random items out of the recycling bin; and we put them to bed with stories and songs. This part of my day-to-day life is one of the only things that hasn’t changed. To them, my worth isn’t measured by my work. They just know that we love each other like crazy, and that we want each other to be happy. And this, more than anything else, keeps me from hitting rock bottom.

Because let’s face it: as much as we give lip service to the idea that one’s identity is made up of much more than work – what we invest our time in daily – the first thing that happens when we meet someone knew is the question, “What do you do?”

Yes, I can say “I’m a writer” and not feel like an imposter – a significant improvement from a dozen years ago – but with that changed-up answer comes an inevitable, painful reminder of my banishment from the “real employment” world. I didn’t choose to leave. I was escorted out after handing over my laptop, phone, and parking pass. And that comes with a heaping dose of shame.

Joe has been patient and understanding and supportive, encouraging me to start work on a book project. And he’s right; I’d certainly be happier if I had a long-term, more sustained project that I could turn to when my work-load lightens up (as it definitely does now and then). But I feel so lost that I don’t even know what such a project might look like, or what I’d like to focus on.

Joe did get frustrated with me the other night, though, when he learned that in addition to our usual bedtime ritual of letting Lily and Neve each choose a book (or a chapter, since Lily’s now reading longer books) that he or I, alternately, read to the girls together, I’d also recently gotten in the habit of, when Lily leaves for her room, singing Neve to sleep – usually “Baby Don’t You Cry (The Pie Song)” from “Waitress”, and “Lida Rose” from “The Music Man” – and then joining Lily in her room for one more chapter together.

“Gorgeous!” Joe called to me from upstairs the other night, when it was his turn to get the girls to bed. “Are you reading MORE with Lily after stories?!”

See, for Joe, our bedtime ritual with the kids happens when he’s already exhausted from his day at work (and making dinner, I should note), and when it’s his turn, bedtime is the last thing that stands between him and the tiny bit of time he has each day for himself, to do something he wants (or needs) to do.

So piling extra things on to bedtime – which can often be a test in patience, anyway, due to the girls’ squirrel-on-speed-like focus, and various stalling tactics – understandably didn’t appeal to Joe.

“Well,” I stumbled in response, “Neve always asks for me to come sing to her, even when it’s not my night, so when Lily asked if I’d read a little more with her, it seemed like that was fair.”

Joe shook his head and sighed, exasperated with me.

“You don’t have to do it on your nights. It’ll only be on my nights,” I said, but Joe was already stomping into Lily’s room. Oy, the guilt.

But later that night, as Joe and I prepared to climb into our own bed, I managed to unearth the real reason for this latest bit of motherly indulgence.

“I think it’s because I’m by myself all day,” I said. “I’m so glad when everyone comes home, but then I quickly become this nag-machine, telling the girls to pick up the dirty socks they left on the floor, and put the towel back on the rack, and clear their place at the table. So I just feel like I want the day to end nicely. When I sing to Neve, and when I read with Lily, there’s none of that sense of me being this grumpy harridan. It’s just this nice time with them. And I need that right now.”

Then I reiterated that Joe didn’t need to replicate my additions to the ritual. This was MY crazy train. He was under no obligation to climb aboard. (And while you may think the answer lies in having the kids around all day every day – nope. My happiness relies heavily on striking the right balance between writing and family.)

The whole incident did get me thinking about the ambivalence I’d felt about having children for much of my life, though.

While trying to define my own feelings, I’d asked others why they were so sure about their desire to procreate, and the answers always seemed frustratingly ethereal and vague.

I’d wanted reasons. My Vulcan brain yearned for a quantifiable, rational argument. But I never really found one.

And now that I have these noisy, willful, impossible little people in my house, at a time when I’m floundering to find my next chapter, I think that I finally understand why I, personally – AND THIS DOES NOT APPLY TO EVERY WOMAN/MAN – needed them to be in my life: because my daughters expect me to be fully present and focused and responsive during the time when we’re together, I necessarily get mini-vacations daily from the neurotic chaos happening in my head. (Parenting is like a way more maddening version of yoga in that way.)

So while the insecurity, fear, and panic about that accompanies this midlife career-quake won’t go away for good until I figure out my next move, getting these temporary breaks are clearly helping to keep me afloat.

This past weekend, we threw a belated birthday party for Neve. And when I stopped obsessing about how much the water slide rental was costing us, and how little I’m now contributing to our family’s finances, I appreciated how Lily had not only set up a treasure hunt for Neve’s friends, but also a face-painting/henna table, where she stationed herself for part of the afternoon; and I kvelled when Neve thanked Lily, and gave me a seemingly endless cheek kiss at day’s end by way of thanks for her party.

Plus, when you’re around kids often, you necessarily start to experience the world through their eyes. There’s little that happens in Lily and Neve’s world that can’t be made a lot better by a night’s sleep; wonder is always welcome; each day offers a new start; Nutella (and other small pleasures) is something to celebrate rather than feel shame about; and when something’s funny, you laugh with un-self-conscious abandon.

Which brings us back to Joe’s hardcore take on “Somewhere Over the Rainbow.” Yes, as the girls cackled on Neve’s bed, I was still painfully aware that my problems weren’t going away, and that I’d have to face them again the next day – maybe for years to come.

But I also got a reminder, as the girls checked in to see my own amused response, that I have a lifetime claim to this tribe. Within these walls, my love is reciprocated. I am wanted, and I am loved.

And occasionally, I can still experience joy, even in the midst of an awful lot of darkness.

2 thoughts on “Singing my kids (and my neuroses) to sleep”