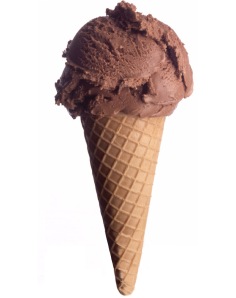 While walking Lily to a nearby ice cream parlor for an after-dinner cone this evening, her words took me by surprise twice.

Once, because I heard a sentence I might utter, word-for-word, coming out of her mouth.

Let me back up for a second. Lily had been a couple of months overdue for her annual check-up, and Neve was due for one as well, so I made a dual appointment for them at the pediatrician’s this afternoon. Weirdly, they assumed each other’s personas when the doctor arrived in the exam room: Neve was a distracted, restless chatterbox, and Lily became watchful, quiet and serious. (It was a bit like “Freaky Friday,” with both body-changers being kids.)

Because I’d noted this, I asked Lily, on the way to get ice cream, “You seemed nervous at the doctor’s office. Were you scared of getting shots?”

Lily nodded, and then, she added, “Well, I wouldn’t say I was nervous. I was more” – she paused as she considered her word options – “concerned.”

Oh. My. God. It was like she’d turned 32 in front of my eyes. (Which was only too fitting, given the conversation that followed.)

I was reeling a bit from this little-sage pronouncement when she followed up with, “I wish babies could stay babies.” END_OF_DOCUMENT_TOKEN_TO_BE_REPLACED