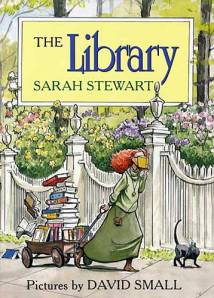 As many of you know, Lily (age 4 1/2) is in the midst of a full-on fancy dress, girly-girl, pink princess phase. And while I’m not pushing back or restricting her that much – since I feel this IS just a phase that she’ll work through – I am doing my level best to read books with her that have, if not a full-blown feminist bent, positive messages for young girls. (I’m having a few issues with “Peter Pan,” which we started reading to her each night before I realized she’s not quite old enough, nor is the book, shall we say, kosher in its depiction of gender and race. But that’s another post.)

Since we’re lucky enough to live a few steps away from the local library (don’t think that escaped my notice when we were looking for a house), we take the girls there often, and when Lily was about two, she really got into the process of checking books out herself. The books she chose were pretty much beside the point, as evidenced by her selection method: step one, approach picture book shelves; step two, grab three books randomly; step three, rush to check them out, having not even glanced at them.

“Oy,” I thought. “This will leave us reading some real clunkers.” And it did, of course. (See this popular post about my experiences with creepy children’s books, may of them “classics.”) But it also led us to some pleasant surprises – books we’d have never found if not for Lily’s blind selection system. So between the books we’ve found by those means, and the ones I’ve taken a chance on via Lily’s preschool book order, we’ve found some good stuff. Here’s a partial list of some current favorites.

“The Library” by Sarah Stewart. One of my favorite movies that I watch every year is “It’s a Wonderful Life,” but one moment that drives me positively nuts is when George must push and push Clarence to get him to reveal that Mary, God help us, has become an “old maid” who’s “closing up the library!” Like the accidental death of a child and the alcoholism that lead up to this are just appetizers to this feast of horror. (Seriously? This was the worst possible fate for a woman?) Anyway, all of this flooded back into mind for me as Lily and I first read “The Library,” which we both love. In the story, a girl loves reading to the exclusion of all else, and is wholly content to follow her passion. But as she accumulates more and more books, she decides to offer up her home as a public library for her town, and moves in with a friend. One of the last illustrations features the two older women walking arm in arm to the library. I like that this provides Lily with a glimpse of a woman who chooses a somewhat unconventional life path. Lily certainly MAY choose to get married, and/or have a child, but she doesn’t have to, and this book demonstrates that. (It also doesn’t make the lead character into a freak that’s outcast from society for her choices.) I also identify with a woman who’s a book-collecting fanatic, of course – but that’s more of a personal reason.

“Madam President” by Lane Smith. I recently found this one on the library shelf, and with the election just around the corner, I wanted to emphasize that although two men are currently squaring off for the position of President, a girl could aim for this goal, too. I’ve told Lily about Hillary Clinton running for President in the last election, and about her current job as Secretary of State, so I thought this book would underline the point further. The text of the tale itself isn’t earth-shattering or anything – a girl goes through a typical day while viewing the world through Presidential eyes – but for me, this is about the images and ideas. And Lily took the book in to preschool for show-and-tell today, which I also consider a win, since other kids will see and think about a girl being President, too.

“Rumpelstiltskin’s Daughter” by Diane Stanley. This was one of Lily’s random shelf picks, and from a feminist’s perspective, it’s a winner. The text is dense, so it’s a book that takes 15-20 minutes to read, but Lily’s a fan of it for about a year and a half now. The story features Rumpelstiltskin running away with the miller’s daughter (she likes short men!) and they have a little girl of their own. When the girl is pressed by the king to make gold from straw, she tricks the greedy king into helping the poor people of his kingdom; when the people in turn revere him, he offers to make the young woman his wife; she opts instead to become prime minister. Boo-yah.

“Betty Bunny Loves Chocolate Cake” by Michael Kaplan. This was from a book order, and I just think it’s a funny and clear-eyed take on a feisty young girl’s obsession. It’s definitely keyed into the way a child thinks: when Betty’s told she has to wait until the next evening to have her piece of chocolate cake, she secretly shoves the piece into her sock and goes to school – and then she’s surprised when it’s turned into a brown, goopy mess. (So amused was I by this book that I also bought “Betty Bunny Wants Everything,” which focuses on Betty losing control in a toystore. Also quite fun.)

“One Riddle, One Answer” by Lauren Thompson. Joe found this one on the library shelf. Yes, it features a trope that drives me crazy in kids’ stories – a girl has reached an age when it’s time to marry, so it’s time to find a suitor (and she’s the daughter of a sultan, so didn’t quite escape the princess thing with this) – but “One Riddle One Answer” focuses on a young woman who loves math, and thus creates a math riddle that a man must solve to be her husband. After a few different men fail to solve the riddle, a man of humble means gets it right; and after they’re wed, the young woman is put in charge of all things related to numbers in the kingdom. So not perfect, but I like the book’s pro-math-for-girls bent.