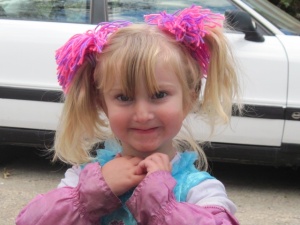 She’s so cute that it hurts sometimes 🙂

Halloween was super-fun this year. Lily had vacillated for weeks about being either a monkey or a princess, but then Joe found an Abby Cadabby costume online, and that was all she wrote.

She went door-to-door with her little friend Michael, a two year old who lives across the street, and they had a marvelous time running from house to house with toddler abandon.

Lily got an early handout from a neighbor (who also snapped the photos).

Though I’d planned on Lily being at least four or five years old when she saw her first live stage musical, some extraordinary circumstances led to her getting a crash course in theater etiquette on a recent Sunday.

Rarely do I have to see a show on Sunday afternoon for a review, but in this case, I needed to get to Dexter to see “Damn Yankees” at the Encore Theatre. Because Joe and I had gone to the U-M/MSU game the day before, leaving Lily with her grandparents for a few hours; and because I’d had to cover a local movie premiere on Friday night; I was loathe to miss a four hour chunk of my Sunday with Lily, too. It seemed there were no other options, though, unless she and Joe came with me to the show. And because Joe had never seen “Yankees,” despite knowing its songs, and because he really wanted to check it out, we decided to go ahead and give Lily a chance at being a Broadway musical baby.

I’ll confess I was utterly stressed on the drive to the theater. Lily hadn’t had her nap, so we expected her to konk out for the duration of the ride, but she didn’t fall asleep until about 10-15 minutes before we arrived; because toddlers are impossible to rush, and because of packing, we were going to be cutting it close, time-wise; we’d planned for Joe to take Lily out to the park and a nearby Dairy Queen if/when she got restless during the show, but I couldn’t find my phone in my backpack, and Joe’s new phone was rendered unusable because it was “locked”; and because we didn’t make the final call on taking Lily until just before leaving, I needed to try to purchase an additional ticket for her next to us, yet I couldn’t call (see phone disaster above) to make the potentially-tricky arrangements ahead of time.

These are not good signs, I thought, trying to keep from having a full-on anxiety attack while sitting in the back seat next to Lily. But we were all in now. No turning back. END_OF_DOCUMENT_TOKEN_TO_BE_REPLACED