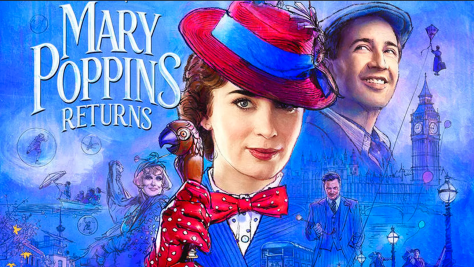 Let me start by saying I had one of my all-time favorite Christmases ever in 2018, in part because it was my first full-on Jewish Christmas.

That’s right. It finally happened for me, people.

After years of being an honorary Jew (by way of marriage), and hearing tales of casual Christmas Days spent eating Chinese food and going to a movie theater – two things, by the way, that would absolutely be included in the Jenn McKee version of “My Favorite Things” (though I rarely get to do either) – my time had come.

At long last, I noshed on takeout kung pao chicken with the fam (plus my mother-in-law) and watched “Mary Poppins Returns” from the vantage point of a comfy cinema recliner.

Including the movie itself, which utterly charmed me, despite its song-for-song replication of the 1964 original film, “Mary Poppins.” I mean, it’s not subtle. At one point, I remember thinking, “Oh, a big production number with the leeries should be coming up, since this is about where the chimney sweeps go full-out via ‘Step in Time.’”

And sure enough, the opening notes of “Trip a Little Light Fantastic” soon sounded.

So recycling the original film’s basic blueprint while telling a slightly different story was clearly “Returns”’ modus operandi. And that bothered me a little. Yet because “Returns” worked, as the original did, to tickle my imagination, and provided several fanciful moments of surprise and uplift – thus reminding me of what it was like to watch the original as a child – I was only too happy to look right past its flaws, grab my own metaphorical balloon, and love it anyway.

But I must confess that as a critic, this bothers me.

Why? Because I’d had the exact same criticism of “Star Wars: The Force Awakens”  – that the film simply lifted the blueprint of the original “Star Wars: A New Hope” to tell a variation on the same story – but in that case, I was way, WAY less forgiving, and cited this critique as the movie’s biggest flaw.

So how do I explain or justify this discrepancy? Why do I just “go with it” in one case, and can’t get past it in another?

I’m still not exactly sure. The hubs suggested that “Returns” at least solved a different problem (a grieving widower possibly losing the family home), while “Force Awakens” tackled the exact same one (the Rebels must somehow find a way – preferably via a nobody from a desert planet with Force swag to burn – to stop the tyrannical Empire). Perhaps. But the flimsy narrative of “Returns” is almost so beside-the-point to its visual whimsy and musical numbers that I tend to think that that’s not it.

I did, however, very much appreciate the seriousness with which “Returns” treats the subject of grief, thus providing the movie with some dark notes and depth. Michael’s song about missing his deceased wife, “A Conversation,” which comes early in the film, is quietly wrenching, as is Mary Poppins’ bittersweet lullaby, “Where the Lost Things Go.” Such hushed, meaningful moments are a true rarity in movies aimed at children. (Believe me, I see a lot of them.)

Plus, it’s not lost on me that part of “Returns”’ magic stems from getting to experience it with my 7 and 10 year old daughters, who were so swept up in the movie that they each – later in the day, while they listened to the soundtrack the second or third time through – told me how great they thought it was. (This is not typical for either one of them.) They’d responded wholeheartedly to the pixie dust, and by doing so, I got to remember what it was like to see the original movie as a child while also standing firmly on the other side of the fence as a parent, seeing the world through their eyes for a while.

Which leaves me where, exactly, in regard to my critic’s quandary?

Nowhere – except maybe to say the obvious: that if a story makes us happy, or moves us enough, we’re generally willing to look past its weaknesses and love it anyway. And such judgment calls are highly subjective, often based on our own personal experiences and pain.

Of course. Critics are ultimately their filters, writing about themselves, again and again, by way of the art with which they engage. But they also inspire us to examine our own feelings and values, and give us useful starting points for doing so.

So I guess I’ll simply have to embrace the contradiction: relying on a blueprint is lazy and uninspired, unless, well, you can so completely win over your audience that they just don’t care.

Now forgive for suggesting it, but “Let’s Go Fly a Kite” – because, you know, from here, “There’s Nowhere To Go But Up!”