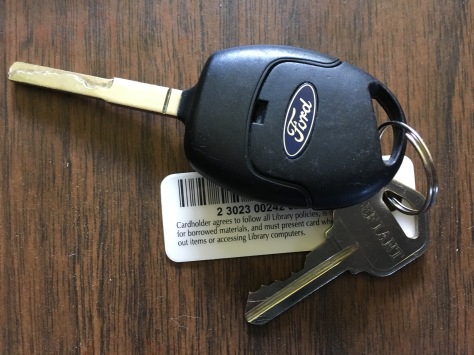 A couple of months ago, I lost my keys.

And like many an overwhelmed, middle-aged parent of young ones, I’d accumulated so many keys over the years that I didn’t even know what some of them were for anymore. A bike lock I’d lost years ago, maybe? Our old house (which has been rented out to others for more than a decade now)? Random luggage padlocks? One of those steering wheel locks that were absurdly ubiquitous in the 90s (a/k/a The Club)? A fob for the girls’ old preschool, and another for entering the now-defunct AnnArbor.com newsroom after-hours?

Yes, my over-packed, out-of-date key ring was the ticket for my daily trip down Befogged Memory Lane. It felt weighty and full and solid in my hand. It vaguely hinted at what lay behind me, as well as my more current responsibilities.

Of course, we all occasionally lose track of our keys, and usually, it’s a stressful-but-temporary blip. After frantic searching, we’ll find them hanging from the front door’s knob, or in a coat pocket. So I didn’t think much of it at first. In fact, I quickly determined what must have happened. Because my library card is on my key ring, too, I was sure that when I went down the street to check out a few books I’d had on reserve, I must have left the keys at the self-check-out counter.

But it turns out that I hadn’t. And I’d already checked everywhere else.

Crap, I’d thought. Now I’ll have to go through the hassle of replacing all the keys I still needed.

Yet by a bizarre coincidence, the “extra” key to my car – which had been missing for years – had turned up inside Joe’s car just a day or two earlier; and we had had a spare house key to give to the neighbor/friend who would feed our cat whenever we’re traveling.

I dug up an old, plain key ring, pulled those two on, and I was pretty much set. Which was wildly convenient and easy, but also kind of bothered me.

Why? Because in some way, two keys on a bare ring inevitably smacks of infantilization – which comes up a lot, unfortunately, when you’re laid off. You’re suddenly a latchkey kid in your own life, not trusted, or needed, beyond life’s most basic essentials. And that’s pretty depressing.

I realize how silly this sounds. As I mentioned earlier, most of the keys I had on my old ring were useless and outdated. But this chunky lump of keys had nonetheless allowed me to retain some illusion of adulthood.

For there’s a haunting, terrifying, thrilling sense that you’re floating like a balloon through your life when you’re out of work. I was recently summoned for jury duty, and when I came to the part of the questionnaire that asked, “Are you employed?” I turned to Joe and asked, “Am I?”

Mind you, I questioned this despite the fact that I’m now making about as much from freelancing per month as I did while employed at MLive.

Yet because I now feel like a rat constantly scrabbling for floor crumbs, rather than a person properly seated at the table of civilization, I no longer have a clear sense of who I am, or my place in the world.

My dad was in town for a visit last week, and when we re-visited his former stomping grounds in Dearborn (at Ford), we drove past the Borders store where I once worked full-time, during the mid-90s, when I was in my twenties. To my surprise, the Borders signs remained on the still-empty ghost of a building.

I don’t think about that time of my life much anymore. I’d been more than a little mortified when highly accomplished, seemingly more together old high school classmates ran into me there as I shelved books and wore a name tag. I felt like I’d failed them and everyone else after graduating seventh in our class of more than 400, and then earning a degree from U-M. But I still harbored hope that I’d eventually become a writer. I was applying for MFA programs, and Joe – my boyfriend at that time – believed in me enough for the two of us. So I told myself repeatedly that this was the struggle part of my journey.

Strangely, though, that hope came with unearned arrogance. (Maybe a defense mechanism?) One of the sections I regularly stocked in the store was self-help, and I remember thinking these books were largely nonsense, comforting and propping up people who didn’t have a strong-enough support system in their lives and thus felt lost.

Oh, to be young and reflexively judgy.

Now that I find myself adrift in middle age, of course, what books do I find myself gravitating toward? “Plan B: Facing Adversity, Building Resilience, and Finding Joy,” by Sheryl Sandberg and Adam Grant. “Presence: Bringing Your Boldest Self to Your Biggest Challenges,” by Amy Cuddy. “Big Magic: Creative Living Beyond Fear,” by Elizabeth Gilbert. “The Happiness Project,” by Gretchen Rubin. Seeing a pattern?

What I didn’t understand back then, in my “find myself” 20s, was that life usually gets way harder and more painful, not easier, as you go. The people seeking out books in my section weren’t weak or unambitious. They were seeking different ways of thinking about their challenges. They were dealing with unspeakable loss. They were struggling with disillusionment, as I am now.

Part of me knows I should be casting my lost keys situation as some sort of Zen lesson. Many of us claim we want to simplify and de-clutter our lives, right? “The Life-Changing Magic of Tidying Up” and all that? Well, in this case, the universe appeared to intervene and do the scaling-down for me.

So why can’t I embrace that and happily accept being like a child in the world again?

Because, like so many things, this is far harder than it sounds. I’ll never fully recapture the sense of hope and endless possibility I had when I was young, because I know there are fewer years ahead of me, and because I’m wiser about how the world works, especially for those past their 30s. I’ve been applying for jobs that I’m wholly qualified for for over a year now, with zero success, and I’ve little to show for my efforts to push myself professionally in the interim.

Yet a couple of weeks ago, when I was cracking under the stress of various things, I went into Lily’s third grade classroom to talk about cave paintings for the school system’s Art Smart program.

My eldest was disappointed before I set foot in the classroom, because I’d told her, a month before, about my plan for finding some old tiles, breaking up sticks for the students, and letting them paint their own cave paintings. Lily had thought this sounded awesome. I had, too.

But like many a frazzled mom before me, my plans fell through, so I had to improvise in the eleventh hour, cutting up brown paper bags in my kitchen an hour before I was due in Lily’s classroom.

The students and I talked about why, 30,000 years ago, when life and the natural world were markedly different, more stark, and more dangerous for humans, these prehistoric people might have worked so hard to create a kind of makeshift paint and draw animals on cave walls.

I asked this room of 9 year olds to close their eyes and think about what visual message they’d leave for people thousands of years in the future. I told them to imagine that their piece of brown paper bag was their own small space on a cave wall. I told them they could draw their chosen image while sitting under a desk or table, to get more deeply into the mindset of those first artists.

Many of them seized the opportunity to doodle in a cave of their own making. One boy drew TIE Fighters in battle, from “Star Wars.” One girl drew her cat. A boy mentioned that he took pride in the face that his culture is considered the cradle of civilization, and that he wanted to draw things associated with Egypt and with his faith.

But many of the kids, of course – including Neve, when I presented the same material to her kindergarten class an hour later – drew the members of their family. This is who I really am, they seemed to be saying. This is my identity, and this is what’s important to me.

I’ve been thinking about this since ever my visit to the school. As I mentioned before, simplicity is deceptively hard to achieve, and the pride I previously took in being a fully contributing member of society – after spending my pre-feminist childhood vowing to learn as much as I could and go out into the world to contribute something significant to it – has now, too often, become shame.

For when you’ve knocked yourself out for an employer for years, and you’re suddenly, without warning, shown the door before you even know what’s going on, there’s no time for an Oscars-like pronouncement of thank yous to those whom you appreciated; likewise, there’s no appreciative quasi-retirement speech from a colleague on your behalf; and there’s no modest acknowledgment of your work via a last-day cake or lunch or happy hour. It’s just you in your embarrassed grief, your semi-secret humiliation, your private messages of comfort and gratitude for good wishes.

It’s like a death, when friends and loved ones don’t know whether you want to talk about it or not, and so they steer clear. And although you may understand rationally that your firing was a business decision, not a personal one, it’s hard not to feel as though you no longer have objective value as a human being.

Indeed, when you don’t choose your fate, but instead have it flatten you like a steamroller, you wonder why you poured so much of yourself into the work.

For me, the answer is that I really believed in what I was doing, and I genuinely liked the people with whom I got to do it. When I landed the job at age 33, I thought I’d finally, after much searching and struggle, found my professional home.

So while I was employed as a staff writer, my small square of cave wall would probably have featured me, in at least one panel, typing away on my laptop, bagel and coffee nearby, my earbuds in for an interview and surrounded by co-workers, while the other panel would be me with my family. 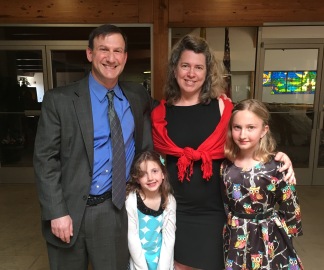 Now, I suppose, like the kids, I would probably focus more pointedly on rendering the distinct members of the our neurotic little family. The girls, along with Joe, have provided me with an unconditional love that no employer ever will, and thus, they represent my best shot at making it safely across this huge existential pothole. (Writing helps, too, of course.) But even as I wrote those sentences, I thought about not wanting my identity to be wholly wrapped up in my children, either. That’s way too much of a burden on them, and I’d lose myself too completely – which is good for no one.

So although future generations likely wouldn’t understand why, I’d also consider drawing a key ring, with just a couple of items attached, hanging from my hand in my cave painting.

For I’m trying really, really hard these days to reframe what feels like the world’s lack of trust as a potentially hopeful new beginning for myself.

(And because I’m a theater nerd, I couldn’t get this song from “Fun Home” out of my head while writing this post. Enjoy the amazing Sydney Lucas singing “Ring of Keys.”)

One thought on “(Nearly Empty) Ring of Keys”