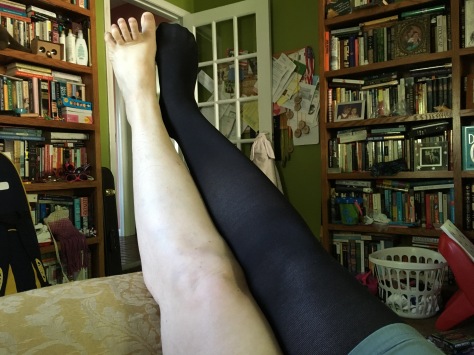 One almost-healed leg next to one in the post-procedure stocking phase. (Pro tip: if you happen to share my painfully pale Irish skin tone, get the beige support stocking. No need to draw extra attention to your temporarily crazy leg situation, especially during shorts/skirt season.)

To follow up on my last post: last Thursday, I had the varicose veins in my right leg ablated, so I’m just going to tell you a bit about what the procedure is like, and what it involves. (Ablated = shut down. Arteries carry blood from the heart to the legs, while veins with “one-way” valves help the blood defy gravity and travel from the leg back up to the heart. When a valve leaks, the blood pools and enlarges the vein, causing varicose veins. Since the affected vein isn’t functioning properly anyway, the treatment involves using heat to cauterize/close the varicose vein. And that’s one to grow on.)

First, after filling out even more paperwork, you’re led to a room with a few lockers, where you remove and lock up your super-valuable pants and pull on a big, stretchy pair of shorts and a robe. But don’t get too excited. It’s not a luxe spa or hotel robe; instead, it’s the fabric version of quilted paper.

2. You’re led into a patient room, where you read the same issue of Popular Science, with Obama on the cover, that you read at your last appointment until a nurse comes in, gives you a black Sharpie to write your initials on the leg they will be working on – to avoid any confusion, I guess?! – and asks you to stand with that leg extended in front of the other. With that same Sharpie, she marks up each varicose vein that they will be ablating on your leg. Which just feels odd.

I’d been through this before with my left leg, two weeks earlier, and because that leg had the lion’s share of visible varicose veins, I’d thought that the right would be a breeze. But then she kept marking. And marking. Crap. This might be slightly less intense then the first time, when they ablated 38 veins, but … not by as much as I’d expected. Shazbot.

3. I presume that if I were being sedated, this would be when it happened – and I say this with a twinge of regret. Here’s what happened: when I went in for my initial consultation, the doctor explained the treatment and said, “You can be sedated for the procedure if you want to, but it’s not necessary. If you opt for sedation, you just have to have someone who can drive you home afterward.” OK. Having a stressed and busy attorney husband, and not knowing exactly what the procedure would be like, my takeaway from this was, this shouldn’t be a big deal, I could probably power through this pretty easily.

Mmmm – not so much. As noted, I chose to have the veins in my worse leg ablated first, and as the pain of incisions and the heat bore down on me, with the knowledge that I had many more to come, I regretted not asking Joe to do his lawyer-ing in the waiting room for a couple of hours. But the dye was cast at that point, so I told myself that I needed to just tough it out.

Then, stupidly, because I’d erroneously thought the right leg was going to be a matter of poke-poke-done, I opted out of sedation last Thursday AGAIN. So during the most intense cauterizations, as I was clenching my body and saying “owwwww,” I thought I needed to share this advice with the world. TAKE THE SEDATIVE, PEOPLE. DON’T BE A HERO.

The whole thing reminded me of my sister-in-law, who once said, in regard to natural childbirth, “If you were getting your appendix out, you’d never say, ‘Don’t give me anything. I want to feel it!’” Indeed. But again, it sounded so take-it-or-leave-it at the consultation. After suffering through last Thursday, I asked one of the assistants, “Do most people get sedated, or is it kind of 50/50?” He said, “No, most people get it. It just makes things more comfortable.” Note to self: ask that question BEFORE jumping into a procedure. This ain’t “Fear Factor,” Jennio, and there’s no medal at the end for those who endure the most. There are enough discomforts and pain in life without needlessly adding others.

4. After getting my leg marked up like a coach’s whiteboard at halftime, the nurse led me to the room where the procedure actually takes place. They instruct me to lie down on the bed at the room’s center, and they ask me what music I like (though apparently “show tunes” won’t come up on their Pandora, leaving me to suffer through a muzak version of Nickelback – the one thing even worse than straight-up Nickelback). They have me turn nearly on my side to prop my back on a foam support of some kind, they wash my leg, and they pull a blue plastic sheet with a hole up my leg. Between that and the quilted robe that been placed like a blanket over my chest and shoulders, I won’t see anything, which is fine by me. When the doctor arrives, he asks, “How’s my favorite writer?”, since I’d told him, during the first procedure, that I planned to pitch a story about going through this process. Rather than growing worried by this, he offered to offer quotes and answer questions, which I took as a good sign.

The lights go down – the mood would be vaguely sexy if not for the tray of sterilized medical instruments nearby – but the round, bright lamps situated directly over me shine brighter, and the music goes out with the spotty wi-fi in the office. This means I can’t hide the occasional “Ow, ow, owwwww” that’s springs from my mouth. Some points on my leg are addressed by a poke that stings, and little else, but now and then, there’s a deep vein, where I not only feel a poke, but pressure, intense pain, and a sense of my flesh being tugged and yanked.

There’s also this weird thing where you feel liquid dripping down your leg, and you reflexively suspect it’s blood, but it feels cold, so you have no idea what’s going on. Some kind of antiseptic solution? Ultrasound goop? Still baffled. Don’t feel like asking.

Though this didn’t happen when they worked on my first leg, they have me flop over onto my stomach to work on some veins located on the back part of my calf. I roll over, and they praise my expert-like flip, and I feel like a performing seal awaiting my reward chum. They say I’m patient of the day, thanks to my roll-over and the fact that I opted out of being sedated. The title doesn’t seem worth the procedure’s occasional, hair-curling moments of agony. (After the procedure on my first leg, Joe asked, “How do you feel?” and I said, “Like my leg was beaten with a meat tenderizer.” But remember, folks, that was 38 veins being ablated. Not exactly “easing into things.”)

5. When the doctor’s work is done, he bids me goodbye and tells me all has gone smoothly, leaving the nurses/assistants to wrap my gauze-packed, bleeding leg in tight bandages, and then to somehow yank my new support stocking up over it all. My nurses, a young man and a woman, are embroiled in office gossip as they heave and struggle to pull up my stocking, with my ankle resting young on the man’s shoulder, and I feel anew the profound weirdness of my current circumstances.

Eventually, though, the stocking is successfully pulled up over all the packing, and I walk like a mummy to a nearby consult room. Waiting for me, next to my seat, is a small bottle of orange juice and a Milano cookie, which – I’ll admit it – is wildly comforting, and I’m more than happy to tear into both. We’re all like five year olds in these moments, lighting up at the prospect of a comforting snack.

My nurse returns to say that I need to keep the stocking on for 24 hours straight, at which point, I take it off, cut the bandages off, shower, put the stocking back on, and wear it constantly for 6 days. (I can remove it for showering and sleeping, but that’s it.) After I change back into my clothes – baggy pants are a must, since the bandaged leg looks like it should be connected to the Stay-Puft Marshmallow Man – the nurse makes me walk back and forth down the full length of the hallway, saying, “We just want to make sure you’re OK and there’s no major bleeding.” “How would you know, through all the gauze and bandages?” I ask. “Oh, it would be pretty obvious,” he says, cryptically. I try not to imagine a kind of blood bomb going off in my calf as I finish my “victory lap” and leave the building.

The support stocking, unwieldy as it is, provides considerable comfort in the days following the procedure. Just having that support as you heal is key. But pulling it on and off, especially for the first day or two, can be painful, especially working around my leg’s most sensitive spots.

I can’t do any strenuous exercise early in the recovery period – I’ve missed 2 of my weekly yoga classes, but I managed to squeeze in 2 runs in the days before my second procedure (scheduled 2 weeks apart) – but they encourage me to walk, so I’ve been doing a good bit of that. No lotions of any kind are allowed on my recovering leg while I wear the stocking, nor may I shave it.

The one self-inflicted thing I absolutely can’t bring myself to do, though? Look at the affected areas of my leg. I knew that I would be severely bruised from the procedure, and on top of the pain of pulling the stocking on and off, I can’t bring myself to stare at my pummeled flesh, too. So I’ve done what I’ve done in regard to my varicose veins for years: I’ve averted my gaze.

And I only lightly ran a bar of soap over the leg’s most vulnerable areas in the shower.

But you know what? The bruising on my left leg is almost completely gone now; the runs I did between procedures felt great; and my left leg looks better than it has in a decade.

So bring on summer, people. For the first time in forever, this lady’s wearing SHORTS.