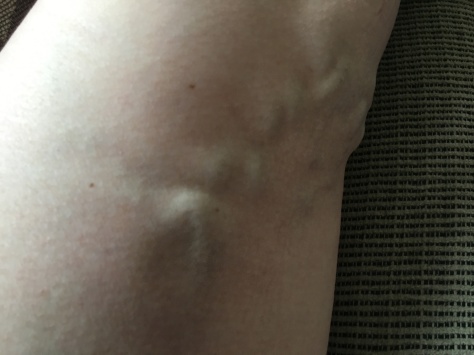 What my inner left thigh looks like. Aging ain’t for sissies, people.

When you’ve kept a specific part of your body hidden for years, it’s terrifying – to say the least – to make arrangements to expose it to a series of strangers, and have that area not only studied from close up, but touched, repeatedly and extensively.

Yet that’s what I did a few weeks ago. I called a medical office that specializes in varicose and spider vein treatment, made a consultation appointment, and said nothing more about it. To anyone. Because I felt ashamed and embarrassed.

Not just about my left leg – the area most plagued by the errant veins – but also because I’ve spent my life thinking that I’m someone who embraces the idea of natural aging. I always wanted to be Helen Mirren, not Cher.

Yet after several years of sheathing myself in leggings, pants, capris, and long flowy skirts, something I couldn’t look away from so easily arose, which is: now when I go running or do yoga, I feel some achiness, some pain in those varicose areas. Plus, I’d seen ads that suggested that health insurance companies usually covered varicose vein treatment, so I thought: “They wouldn’t do that if it was just a cosmetic procedure, right?”

With this in mind, a couple of weeks ago, I did a web search for local options, took a deep breath, called for an appointment.

I showed up at the office on Friday, filled out the usual ream of paperwork, and was led back to an exam room, where I was instructed to put on a stretchy pair of large blue shorts.

I changed and sat on the edge of the exam table, already feeling weirdly exposed before anyone even entered the room. I didn’t look at my left leg. I’d taught myself, over the years, that if I didn’t look at it, I wouldn’t obsess over it. I’d keep my mind clear for other, more substantial or joyful things. But I knew I’d have to get over that bit of self-therapy in a few minutes.

Indeed, not only did a nurse come in to talk with me about my history – varicose and spider veins are largely genetic (my mother had them, and my paternal grandfather once had a multi-hour surgery decades ago to have them removed), and pregnancies may also cause them – but she told me the next nurse would be doing a thorough ultrasound on both of my legs.

I nodded, noticing that I was already, reflexively holding my legs tight together, so accustomed am I to hiding the inner thigh and inner calf of my left leg from view. It’s as if I couldn’t turn that impulse off, even when seeking help.

The next nurse soon arrived, and she asked me to stand on a long, raised step, one leg in front of the other (holding on to a bar for support), while she took readings with an ultrasound machine and occasionally squeezed my calf to check veins for reflux (blood traveling the wrong direction, down toward the foot rather than up to the heart). My right leg was first, and the process seemed painfully slow, thorough, and awkward, but tolerable.

When she asked me to switch legs, I did so without hesitation, but as she applied and re-applied the cool gel used for the ultrasound, and repeatedly touched the two areas I couldn’t even bring myself to look at, I suddenly found myself struggling not to cry.

I’m not even sure why. Facing your fear can be emotional, of course, but I think the feelings of that moment also stemmed from this woman’s unflappable, neutral acceptance of the areas of my body I’d long ago deemed hideous, and in need of constant shielding from others’ piercing, critical eyes.

On a few occasions, in the past, Lily has caught a glimpse of my leg when we are swimming, or when my capris creep up my calf. “Mommy, what’s wrong with your leg?” she’d say, and I never knew how to respond. I stumbled around, saying things like, “Well, my mommy’s legs looked like this when she got older, so I think I just got it from her.”

But I’d felt embarrassed and humiliated, of course, and the shame deepened from there.

After the seemingly eternal ultrasound procedure, I met the doctor, and we talked a bit about running (we’d done the same half-marathon, though in different years) before he told me about what my treatment would look like.

The varicose veins we see, he explained, are actually the branches from a larger vein that’s sending blood in the wrong direction. Since we don’t need those specific veins (that aren’t working properly anyway) to function physically, he shuts them down, and the branches disappear.

They would do this procedure on one leg at a time (at least a couple weeks apart), and I would have to wear a support stocking (measured and ordered at a medical supply store) for two weeks after each procedure. I could opt for sedation, in which case I’d need to bring someone to drive me home, but if I didn’t, I’d simply be able to drive myself.

Follow-ups would happen 10 days, 3 months, and 6 months after the procedures, just to make sure no blood clots or other side effects occur; and beyond that, I’ll go in for an annual check-up to make sure any other varicose veins that surface will be treated. (And yes, this will be covered by our insurance.)

So that’s it. My procedure appointments are scheduled; I should be fitted for support stockings sometime this week; and I’m suddenly, stupidly giddy about feeling comfortable in, and un-self-conscious about, wearing shorts and dresses and a swimsuit again. I’m downright giddy. My varicose shame has pretty much guided my apparel choices since Neve’s birth in 2011 – and the chance to be suddenly free of that feels like an unexpected grace.

Of course, Joe has been urging me for years to seek help for this. Not because my large-curd-cottage-cheese leg grosses him out, or even bothers him remotely, but because he knows it bothers me.

“If you’re that self-conscious about it – then what do you have to lose by just making an appointment and seeing what a doctor has to say?” he’d said.

I’d always nod, acknowledging the sense of his words, but I would say little in response.

When I was working, and mommy-ing besides, it was almost too-easy to shove away the things that made me queasy or scared. “I’m too busy. Where would I find the time to do that?” I could always say to myself and others. And it’s always true. Not to mention the fact that doing something I thought was motivated by sheer vanity seemed selfish and inexcusable.

But in retrospect, I’m a little floored that the main thing that kept me from seeking treatment is the idea I have of myself and my priorities, and how the current me might – gasp! – not live up to the vision I’d had of myself as a younger person.

“I think I would have made an appointment years ago,” I told the doctor near the end of my appointment, “but what kept me away was this idea in my head that this is just a cosmetic issue.”

“That’s the number one misconception about vein treatment,” the doctor said.

So I’m not alone, clearly.

And now, feeling the satisfaction that comes from working to solve a problem instead of running from it, I can’t help but think that my wrongheadedness was hypocritical, too.

For there was just as much vanity, if not even more, bound up in my former, rigid vision of myself as an above-it-all, nature-embracing aging woman. While staring down the challenges of an aging body, I would rather now, in the moment, aim to be a woman who’s courageous enough to ask for help, even when it’s personally painful and embarrassing.

And I hope this keeps me in Mirren’s general neighborhood, anyway.