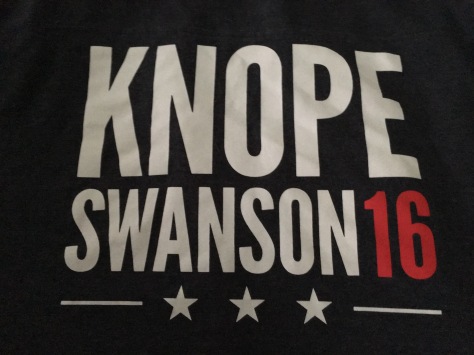 This t-shirt is the closest I will come to a political endorsement this year.

Am I feeling the Bern or am I a shill for Hill? How do I feel about the passing of Supreme Court Justice Antonin Scalia?

Unless we’re hanging out in person, or at least having a one-on-one “virtual” conversation, I’m not likely to say.

Not because I aim to be coy, or because I’m apolitical (I’m decidedly NOT), or because I think we should all cloister ourselves regarding this topic. It’s just what feels like the right choice for me.

This is partly because, over the last several years, I’ve thought a lot about what I most value about Facebook, and the many roles it has the potential to play in our lives. It can be a personal news site; a promotional tool (and I definitely use it for this, sharing my stories and blog entries when they publish); a therapy couch (guilty); a rhetorical tool/soapbox; a memory book; a virtual garage sale, or a help desk (it equipped me sell nearly 100 boxes of Girl Scout cookies for Lily in one day); a storehouse of our own unique perspectives and witticisms – the list goes on and on.

But just as I didn’t want to make the decision regarding whether or not to have a child based on all the different voices chattering in my ear – it seemed too important a choice to rush, or to make at a time when I was struggling to hear my own thoughts – I feel the same about my political leanings. Deciding who deserves your vote is a private, often highly personal process, and while I certainly read articles and opinion pieces sometimes shared on Facebook, and while I have political conversations with those closest to me, I’m quite deliberately choosing to leave it at that.

You might accuse me of lacking the courage of my convictions. But I really don’t view it that way.

Is it convenient to my conflict-averse nature that I’ve arrived at my approach to social media? Of course. I don’t deny that. But I also, while considering what Facebook offers to each of us daily, have come to realize that while I’m willing to be challenged, and sometimes pushed to question my beliefs, I largely view my “presence” in the world of social media as being that of a dinner party guest. I’m mostly there to socialize, laugh, hear news, and be pointed to interesting articles; generally, I’m not hanging out there to pick a fight – which, these days, is an inevitable consequence of discussing politics.

I’ve found myself in the thick of them sometimes anyway, of course; because the Komen controversy of a few years ago hit close to home, I couldn’t resist engaging in multiple conversations; and I’ve definitely gotten involved in a few discussions about the Confederate flag. So when the mood strikes me, and I feel like I’ve got something new to add to an ongoing conversation (that’s civil and not-yet-off-the-rails), I’ll absolutely jump in.

Usually, though, I pause, hold my fingers over the keyboard, and think better of it. Am I willing to invest the emotion and time it will take to see my arguments through to their endpoint? Sometimes, the answer is “yes” – particularly when those involved seem to be trying to have a genuine, earnest exchange of ideas about a tough topic.

But as we all know, in the world of social media, those discussions are sadly more the exception than the rule.

For all of us – it’s just human nature in action – Facebook has become an echo chamber, where we tend surround ourselves with those who are like us, and un-friend those who write things that upset us. That’s fine. It’s our daily dinner party, after all. If we don’t want someone at our house, off they go from the guest list.

The down-side, though, is that even among those with whom we share basic political values, there’s going to be disagreements. And because the stakes seem so high this election cycle, and because our political leanings have become a central part of our online identity, everyone’s pretty wound up pretty tightly about their guy/gal right now. Any critique of your specific candidate stings and seems to demand a response.

But really, is anyone’s opinion shifting as a result of these spontaneous social media debates? Are they laying a foundation for rational compromise, or cementing us more solidly in our respective corners? Would I want anyone to vote for a candidate simply because that’s the person I’m supporting?

Nope. I’m just a shmo who’s been processing what the candidates say and stand for, as we’re all doing, presumably. So I’ll continue keep my leanings and thoughts on the matter to myself, mostly.

Not that I fault others who choose to fight and do some “virtual stumping” for their candidate. I read the posts; I sometimes read the shared articles; and I take in these perspectives. Some of it’s quite useful. But generally, that’s where engagement will stop for me almost every time. Despite my propensity for blogging and social media oversharing, there are some parts of myself that I wish to remain private.

The personal may indeed be political, but the political can be really personal, too.