This past weekend, while watching “Frozen” with Lily and a few of her friends, I sat in the darkened theater, hoping against hope that the “act of true love” needed to save the story’s spunky heroine would involve the young woman’s long-estranged sister instead of the male lead.

Well, wonder of wonders, folks. It DID. And I couldn’t have been happier.

Not just because “Frozen”’s creators deliberately chose to forgo the tired, predictable Prince Charming paradigm; but also because I’m currently doing my damnedest to cultivate a positive, enduring sense of closeness between my two young daughters.

And every narrative that underlines the idea that siblings matter, and are to be treasured, subtly advocates for my cause. 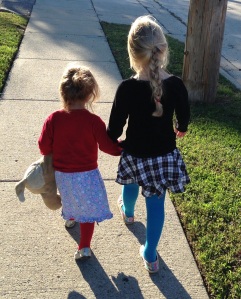 But while my own girls are small, and my influence is at its highest point, I’m taking every opportunity to praise Lily for being a terrific big sister (which she is); to have them hug each other, and wish each other goodnight, as they part ways to go to bed; and to work out minor conflicts between themselves whenever possible. (If they continue to fight over something, they know now that Joe or I will take the object away indefinitely.)

Why is encouraging an enduring, close relationship between my girls so important to me?

I’d be lying if I didn’t confess that anxiety about my family’s health history plays at least a small role. I’m an “older mom” – 37 when I had Lily, and 40 when I had Neve – and because I lost my own mother to breast cancer (which runs in the family) shortly before she turned 67, I feel an intensified sense of urgency about encouraging my daughters to become friends, so that they might always turn to each other for support or help, and know they have a cheerleader rooting them on.

In the end, presuming our lives assume the typical course, my daughters will be left with each other, and I want their connection to be a joyful blessing instead of merely a biological fact. For the older I get, the more I believe that “home” is the comfortable, sunny state of mind you return to when spending time with a person who knows your soul, warts and all; and few in the world can know you better than the person who watched you, at close range, grow up; who was raised by the same people; who attended your school; and who absorbed your hometown’s landscape.

But all that’s no guarantee for closeness, of course. While I’m certainly on decent terms with my own sisters, we don’t often talk extensively, or see each other regularly. There’s a reasonably big gap in our ages, for one thing – as kids, no two of us attended the same school at the same time for long – and our family just wasn’t one of those kissy-huggy-effusively-chattery kind of families. We’re generally reserved and pragmatic, and we each live our own, fairly different lives.

This being the case, I sometimes fear that I have no idea how to help build the kind of relationship between sisters that I haven’t personally experienced.

Yet by sheer coincidence, I married into one of those kissy-huggy-effusively-chattery families, and two young cousins of Joe’s have, in a way, become my aspirational template for Lily and Neve.

These two sisters moved around a lot as kids, so they had been the one constant for each other in an always-shifting landscape. And while Joe and I are pretty much the opposite of nomadic, I did ask the young women’s mother whether she did anything to foster the cheerful, unabashed closeness the sisters have long shared, from childhood into adulthood.

After thinking a moment, she said, “Whenever they’d fight, I’d make them separate and tell them, ‘I want you to think about what your life would be like without your sister.’ And after a few minutes, they’d come back, crying and hugging each other and saying, ‘I’m sorry,’” she told me.

This is something I’ve lately considered in regard to Lily and Neve. For we have to restrain Neve, when she wakes up, from entering Lily’s room and waking her, so anxious is Neve, from the day’s start, to see and talk with her big sister; and Lily, who adores having a constant audience and playmate and companion in Neve, often comments beneath her breath, about something Neve says or does, “That’s so cute.” Though having a second child was an extremely difficult decision for us, it now seems unthinkable that these two should not be sharing their lives together.

And while I know that no one thing is the secret to happiness, a strong, foundational sense of family goes a long way in the “quality of life” category. Lily and Neve have already provided so much joy in, and love for, each other, every day. I hope they always will.

So even though Neve fell asleep in the car on the way to see “Frozen,” and thus didn’t witness the film’s “act of true love” between sisters, she will. I’ll make sure of that. Because I’ll take all the positive, pop culture ammunition I can get.

And then maybe I’ll teach the girls the words to, and choreography for, this “Sisters” number from “White Christmas.”

If nothing else, it will give them the chance to bond, later in life, over their crazy mom’s eccentricities.