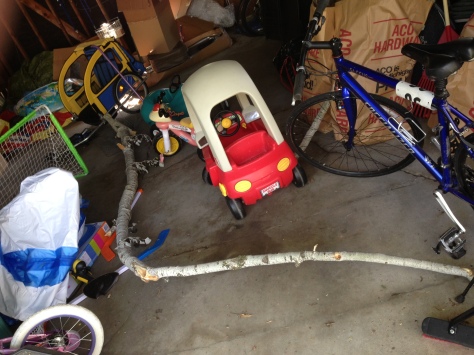 On Monday, while I was at work, I got an email from a neighbor who was concerned about some gigantic tree limbs and branches that had fallen from our old cottonwood on Saturday, shortly after we’d hosted a big backyard birthday party for (now five year old) Lily.

The unwieldy limbs had fallen onto a section of my neighbor’s garden, near the big bounce house we’d rented for the weekend. And right when it happened, my neighbor came to let me know (I’d been inside the house, doing post-party clean-up), and then she helped me lug the biggest limbs onto the grass, a few feet from her garden.

Since then, though, I’d just left them there, assuming Joe and I would get around to breaking them down when we got the time. Ha, ha.

But Monday’s evening forecast called for rain, so my neighbor was afraid – probably justifiably – that a truckload of little cottonwood saplings would spring forth in both our yards if I didn’t take action right away.

“OK,” I thought, still seated at my work desk. “Change of plans.”

I called Joe and asked if he could come home a bit early, before I got the girls from preschool. The answer was “no.” But he insisted that I wouldn’t be able to do the job myself, and that it would take me at least an hour.

But never underestimate the determination of a mommy willing to cut corners.

Yes, I proved my husband wrong on both counts. I arrived home from my commute at about 4:30, and because I usually get to the girls’ preschool at about 5 p.m., I went to work immediately.

Whirring with activity while still in my work clothes, and breaking off branches while holding limbs to the ground with my foot, I packed three yard waste bags as a cloud of cottony fluff funneled around me. When I’d broken down all I could – in a half-assed manner, naturally, with big branches sticking out over the tops of the bags – I dragged the paper sacks into the garage, leaving an enormous, 15 foot, stripped hunk of tree on the ground.

Though it had taken the strength of both me and my neighbor to move it two days before, I thought it worth trying to move by myself, now that it was a leaner version of itself.

So I squatted down, grabbed hold of the thickest part of its circumference, and stood with it in my arms, pulling it into the garage.

And at about that moment, the clock in downtown Farmington chimed five o’clock.

I tell this story not to underline what a fierce bad-ass I am – though that would be an awesome bonus – but rather to explain how this experience is emblematic of my day-to-day life since becoming a parent.

Though I have always been a very thorough, meticulous person, who – despite having a penchant for tardiness – was generally on top of things, I have, since Lily’s birth, become a scattered mess and a notorious corner-cutter.

Taking care of little ones who need just about everything from you, all the time, gives you approximately 63 new things to remember and consider and decide each day. I’m not ashamed to admit I get lost; I forget things; I take shortcuts – let me amend that: I take LOTS of shortcuts.

But I give myself full permission to do so, because the important, bottom-line things in our day-to-day life now are that all family members are fed (even if it’s a dinner of yogurt and Cheerios), clothed (maybe in dress-up clothes, for all I care), well-rested (Mommy and Daddy, not so much), healthy (hello, random ER visits), and loved, and that Joe and I can still do our jobs competently enough to hold onto them through all the bumps and surprises that inevitably arise during these early years.

This may sound relatively simple, but a thousand little details go into maintaining these basic tenets – details that I’m not so great at packing into my head in a meaningful way.

Even so, on most days, these basics are covered. It’s not always pretty, and it’s not at all the way I would do things if I was just taking care of myself, but by nightfall, I can usually at least check the “bare minimum” box in my head.

Which is what the phrase “putting the tree in the garage” has come to mean to me since Monday. Not doing something right, exactly, but doing just enough to maybe buy a few more seconds of time. A shortcut. A band-aid. A means of getting us all through the day, each day.

So when I throw Lily’s friend’s birthday present into a gift bag, unwrapped, without a card, just as Lily’s going out the door to that party, I’m “putting the tree in the garage.”

When neither I nor Lily have brushed our hair before friends and family arrive for her party, and I resign myself to this reality, I’m “putting the tree in the garage.”

When I fail to separate the laundry into whites, colors, and darks, because I’m just not that invested anymore – or when I decide to break out the paper plates on a night when we’re ordering pizza, even though we have plenty of clean dishes – I’m “putting the tree in the garage.”

And when I throw half-read newspaper sections and (maybe still clean?) clothes into my closet and close the doors on that one morning, once a month, when a cleaning crew works in our house, I’m “putting the tree in the garage.”

This new way of life doesn’t come naturally to a reformed Type-A like myself. But over the last five years, I’ve had no choice but to adapt.

And the fact that there’s a hulking 15 foot tree limb in our garage now bothers me not at all. One day, eventually, we’ll break out the saw, and we’ll cut that monster to bits.

Oh, who am I kidding? If it happens, it will likely be months from now – maybe the night we’re staring down Michigan’s next big snowfall, when Joe and I are desperate to tuck our cars into the garage once again. (Because we really don’t want to brush and scrape snow from our windows in the morning, of course.)

But even then, something tells me that the two of us will be out there as night falls, panting and shoving the giant limb around the garage, trying to find a way to fit it alongside the cars.

Or maybe we’ll just yank it back into our backyard for a while.

I seriously wouldn’t put it past us.

One thought on ““Putting the tree in the garage””