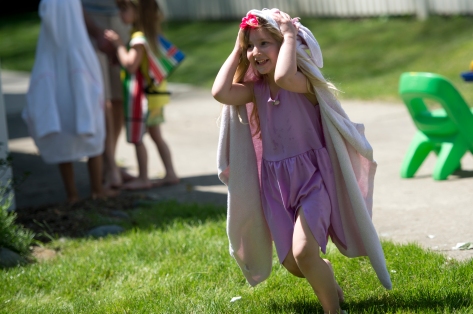 I thought I’d start with this image from your 4th birthday party – May 19, 2012 – because for me, it sums up both who you are at this time in your life, and what your party day was like.

Since you were a baby, you’ve often been branded (by your Grandpa Grekin and others) as a “spitfire” and a “spark plug” – and, in somewhat less appealing moments, a “handful.” You are your father’s daughter in that you are fiercely passionate, you have strong opinions (God help us when you’re a teenager), and you show no signs of shyness or inhibition. (Your father reports that on a recent evening, when I had to work, you were in a restaurant and pursued conversations with patrons at two different tables.) So for me, this photo seems to, at the very least, hint at all of these things.

Appropriately, you’re wearing a purple fairy dress (complete with limp mesh wings in the back) that we got from your Aunt Susan at Christmastime, when the airline lost your little suitcase. You’ve stuck a bright pink flower hair clip that’s supposed to be part of a headband into the dead center of your hairline; and you’re wearing a bunny towel as a bizarre kind of cape while running barefoot in the sunshine across our backyard, beaming as you go. You are in your element. 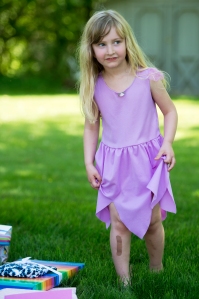 And more broadly, the party had just this kind of vibe. Between the trampoline we just inherited from neighbors who moved, and the kiddie pool, and the easel and sidewalk chalk, and the inflatable slide we rented for the day, you and the dozen or so kids who showed up during the course of the afternoon were free to run around like happy puppies from one amusement to another. (And since it was in the middle of the afternoon, no one had to worry about a meal; instead, we set out goldfish, fruit, and other snacks and drinks and everyone was happy to help themselves.) The only time the kids were temporarily harnessed was when you opened presents – which was the first time many of them had spotted and noticed the trampoline, so even that segment had its kiddo appeal.

Melanie, my talented photographer co-worker who took this picture (and many more), seemed to capture the freedom and carefree-ness of your childhood in this picture, and I’m so glad to have it. I know that things will get more complicated as you get older, but at least for now, I appreciate the way you have this profound capacity to embrace the world and just feel unadulterated joy.

On your actual birthday, a Monday, I woke you up and brought you downstairs, where two presents (a new dress, with a sparkly butterfly on the front and a tutu skirt, and a Rapunzel nightgown for summer) awaited you. The third, marquee gift was unwrapped, and in order for you to see it, I led you down into the basement with your eyes closed. Here’s your response, captured on video.

You tried the bike out on the driveway while wearing your “nightgown” (really an old shirt Grandma Grekin gave you when you and your cousins were playing at her house); put on your new dress and asked with wide eyed wonder, “Am I bigger?”; ate a breakfast from Panera (your favorite – a four cheese egg souffle and a mango smoothie), and climbed onto your new bike to ride it to preschool. It was a gorgeous, sunny day, making the whole thing rather crazily idyllic.

I love that you get the sense of chaos of our house (including Joe, mid-diaper change) in this shot.

(What was less idyllic was the behind-the-scenes scramble that preceded all this. On Saturday, I covered a play for my friend Don, and on the way home, at 10:30, I stopped at Meijer to get a bike-in-a-box, and picked up the nightgown there, too. I stayed up to write the review of the play on Sunday night, and after that, at around 11:30 p.m., I sat in the dim light of our basement, reading the thankfully simple bike instructions while seeing if I could quickly throw it together. Phew!)

Here’s a brief glimpse of the view I had during our morning “commute,” while I pushed Neve in the stroller and carried a plastic bag with 2 packs of Little Debbie brownies for your pre-school friends, so that they might toast your milestone at lunchtime. (No, I didn’t make a treat for everyone from scratch. Guess who never, ever cares about this? Kids.) As a sidenote, it seems that I was so enchanted with the sight of you on your new bike that I kind of forgot about the whole helmet thing. Oops.

Of course, being 4 isn’t all new bikes and souffles. I knew, at some point, there would be a limit on how far we’d go saying “yes,” and that came before dinner, when you wanted to have your meal in the living room while watching “Mary Poppins.” Though you usually are only allowed 30 minutes of TV time in the evening, I’d let you watch about an hour at that point, since it was your birthday, but I’d drawn the line at dinnertime.

“No, sweetie. I know it’s your birthday, and I’ve let you watch the movie for longer than I usually would, but we eat together as a family, no matter what. Do you want to eat on the porch or inside?”

At this point, a raging fit ensues, which continues with wailing and weeping throughout a mostly unpleasant dinner on the porch. (Sigh.) But this is part of the deal, I know. You’re growing up, and an inevitable part of that is you’re going to keep pushing and testing and raging against “no.” And as ugly as this sometimes gets – and it DOES – by now, I know that eventually, it passes.

And it did that night, too. You blew out a candle on your cupcake – admittedly while still sniffling dramatically, if I remember correctly – and you rode your bike around the neighborhood with your dad.

Thankfully, the day of your party was remarkably drama-free. You were kind and generous with your friends, you said “thank you,” and you seized the day with admirable gusto.

The night before, as we ate dinner on the porch (again), the guys with the inflatable slide showed up. We hadn’t told you it was coming, so you watched as they unloaded this large plastic something into our backyard, and asked repeatedly, a small smile on your face, “Who are those boys? What is that? What are they doing?” “I don’t know,” I said, teasing you as your father laughed. “We’ll have to watch and find out.”

You stared and grew more excited as it became clear what it was. You slid on it with us that night; and the next day, you successfully urged neighbors and friends of ours, grown men and women, to play on it with you, too. Yes, you can be a handful, but you are a fun, smart, charming and warm child, and I’m watching you grow up with the same wonder you exhibited when those young boys were putting air in the slide. I’m watching and holding my breath, too, to see what you become.

I love you like crazy, Lilybug. And I will no matter what.