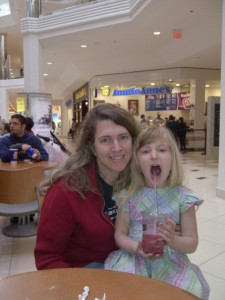 On a recent spring day, when it was a little too chilly to spend time outdoors comfortably, Joe, Lily, Neve and I headed to a nearby shopping mall to buy a few gifts. Not long into the trip – which involved going up and down escalators several times (escalators are for Lily, as they were for me as a child, a thrilling amusement park ride) – Lily spotted the play area and made a beeline for it. Neve had fallen asleep in her stroller, so we decided I’d follow Lily while Joe finished his errands with Neve.

I halted Lily at the play area’s entry point, reminding her that she needed to remove her shoes. She asked for my help, so I squatted to pull them off; but in that same moment, I also got that feeling you get when you’re low to the ground and someone moves into your line of vision. I looked up. And when I did, I locked eyes with a man I’d known since he was a not-so-nice young boy in elementary school. He hadn’t lost any of his hair (curses!), but had shaved it down to little more than a shadow; his eyes still had that same condescending, humorless, looking-past-you-to-someone-who-might-matter expression; and in terms of his body, this former football player (of course) looked like he was still in rock solid shape.

The two of us stared at each other a beat or two longer than would complete strangers. I was making absolutely sure he was who I thought he was, and vice versa, while in the same moment, we both made a kind of unspoken pact not to acknowledge each other verbally. Why? We weren’t friends; we weren’t going to be friends; and pretending otherwise achieved nothing. So I finished getting Lily’s shoes off and sent her toward the equipment to play, while I settled into a seat on a nearby bench.

While watching Lily trying to walk along the edge of the play area’s rowboat, as if it were a balance beam, I stole glances at this man and his young son, who kept running to his father to eat a spoonful or two of ice cream from a cup. The man was dressed in dark jeans and a dark shirt that flattered his body, and his boy wore a clean, polished-looking play clothes. I started to spin a tale in my head, wherein this was the man’s only time each week with his son, thanks to a bitter divorce. (Cue it: “And the cat’s in the cradle and the silver spoon…”) But who knows? This storytelling impulse is just something we tend to do when a person who was unkind to us during our childhood has the nerve to age beautifully.

He wasn’t on a Blue Tooth, nor did he immediately lose himself in a smartphone, as I’d smugly, cynically expected; but neither did he seem to steal glances toward me and Lily. He just stood there, zombie-like – maybe still pretending to be cool. But damned if that stance still kind of worked.

Because sure enough, I started to see things through his imagined eyes. I’d showered after my late morning run, so my hair was damp, chaotic, and birds-nest-like; and I wore jeans and T-shirt, covered by a red, worn, zip-up sweater. Not exactly the “I’ve totally given up” uniform of female middle age, certainly, but not a very together-looking person, either. And then I looked to Lily, who was wearing her favorite, secondhand plaid dress, which has fabric buttons from the top to the bottom. Though the buttons are supposed to go in the front, with waist level ties in the front and back, she always insists on wearing the buttons in the back, with both ties there as well. So here’s my daughter, wearing her dress backwards, her hair an untamed mess.

And while Lily wasn’t playing near this man’s child, I nonetheless thought, while looking at each of them, wow, perhaps history is repeating itself, and we are powerless to resist the patterns of our parents.

I certainly don’t want to raise girls who are obsessed with their appearance – that’s really important to me, since young women inevitably combat body image issues – so I don’t painstakingly groom them, and I let Lily choose her own clothes each day. But suddenly, I was only too aware of how my parenting philosophy might appear as sloppy neglect to others.

Lily soon called out for me, wanting me to fling myself into a large wagon that kids were climbing into and out of like puppies. I stood next to the wagon and held her hand. “Aw, sweetie, I can’t,” I said. “I’m too big. This is for kids, not mommies and daddies.”

But I stayed with her, talked with her, lifted her out when she was ready to go on to something else – all while self-consciously aware that this man might be discreetly sizing up me, too, and pondering what (besides a mother, obviously) I’d become.

Because that’s what a lot of this baggage from the past is about: sizing up what we’ve done in our lives (and who we once were) versus what we’d hoped for ourselves. And we always feel that most viscerally when we run into someone who knew us during our youth.

About 8 years out of high school, for instance, I was working at a Borders in Dearborn. I’d earned a masters degree in English, but had no idea what to do with it, so I’d gone back to my pre-masters “career” in bookselling retail; and it was at this point that a few people I’d grown up with – people who’d been nice to me – showed up sporadically in the store. One was a doctor; one was an auto executive with a sleek, sporty car. I, meanwhile, was loading books from the storeroom onto a V-cart and shelving them by author for little more than minimum wage.

And when these old friends recognized me, I stumbled, stuttered, blushed, and avoided eye contact. I’d academically ranked 7th in my high school class of more than 400 people. All my life, people had told me how bright I was, and that my future would surely match. And running into these people from my childhood was a sudden, harsh reminder of what I had failed to become; I didn’t even seem to be on the path to something better at the time, but rather, I was spinning my wheels.

In both cases, I cried on the commute home, feeling that I’d disappointed everyone, most of all myself. I was supposed to achieve great things, wasn’t I? How had I come to live so far beneath my potential?

It’s like the blue business suit my parents bought me when I graduated from college. “For interviews,” they’d told me. It hung in my closet, unworn, for years and years, like a dark reminder of their, and my, unrealized ambitions for me.

The man in the mall, though, was a different story. As far as he was concerned, by appearances, I turned out exactly as he would have guessed, presumably.

And while certain people from your past who always made you feel small can put you right back in that self-loathing, adolescent headspace immediately – it’s kind of like taking a brief vacation to Gary, Indiana – I steadied my gaze on Lily and reminded myself that I did eventually work my way up from that Borders job. While I invested years of study and effort into writing, I kvetched about the long odds of “making it”; that I could spend my entire life in retail (which was tolerable but uninspiring and mind-numbing), trying to do this thing that might never pay off in any discernible way. And while I haven’t yet published a book, I have, for the last several years, been paid to read and learn and WRITE about theater, film, books, television, comedy, and music – all things I value and adore. Not only that, but I’ve had the opportunity to speak to some amazing, sometimes famous, artists of all stripes along the way.

Now, a bit of luck always plays a role in such things; I was clearly in the right place at the right time to get the job I have. But I made my own luck, too, by sticking to it and working hard to become a better writer. I’m still doing that.

Plus, I have a supportive, smart, funny husband and two happy little girls who seem to love the stuffing out of me – uncombed hair, stretched-out sweater and all. My, ahem, casual appearance is the product of a life wholly invested in my family and my work – I’m ALL in – instead of in my vanity. And I shouldn’t be ashamed of that.

So maybe, I thought, it’s time to finally banish the blue suit that’s haunted my closet for nearly 20 years now and claim victory.

And time to refuse to let shopping mall jack-asses from the past make me feel less-than. It’s true that high-spirited Lily, in her backwards dress, will likely face much of the same nastiness from her peers that I did growing up – perhaps it will even be at the hands of this jerk’s young son. But when she does, I’ll be there to tell her, as Dan Savage has so wisely emphasized in his recent campaign, that “it gets better.” That’s true whether you’re gay or straight, frankly. For as you get older, the people who were once cruel to you disappear into the ether, and you finally have the freedom to define and love yourself, and surround yourself only with those who love and support you – “cool kids” be damned.

At the mall, Joe eventually settled at a table just outside the play area, with a just-purchased smoothie for Lily and me to “share.” (Lily gives me one sip for every 16 of hers or something.) I joined him, pulled Lily onto my lap, and watched discreetly as the too-cool man from my childhood helped his son with his shoes.

Good riddance, I thought, to him and all the insecurities of adolescence and young adulthood. You aren’t, and won’t be, missed.

2 thoughts on “Confronting the past, in jack-ass form”