As noted in my previous post, our recent vacation to Camp Michigania got off to a rough start.

But eventually, that first night, Lily was snoozing deeply enough on my shoulder that I got her into her crib – none too delicately, I’m afraid – and Joe and I got to sleep, too. Finally.

The next morning, we walked past the horses (which Lily, riding on my shoulders, was very excited about) on the way to breakfast, and then we made our first visit to kids camp. Sets of parents holding babies and tennis rackets were trying to drop off their little ones for the first time, so there were tears and pleas and tension in the air, despite the playground setting.

Not surprisingly, because we were in a new place, Lily was a little unsure at first, too, so we stayed while she went down the slide a few times and got to know one of the counselors. Then she spotted a corner where kids were sticking their foot in red paint and making a print on a big piece of butcher paper. Once Lily saw that, she got in line and was happy as could be, waving to us as we kissed her and told her we’d be back in a while.

So Joe and I went for a short run together (a rarity these days), cleaned up, and got a cat nap. At around 11 a.m., we picked up Lily to go to the beach – her first-ever beach experience. She LOVED it – especially playing with the new bucket with a water spigot I found at Costco – and we soon noticed camp employees setting out food and firing up a grill in the nearby shelter. Lunch AT the beach? Hot dogs and fruit, two of the handful of things that Lily willingly eats? Yes, please!!

We stayed at the beach with Lily longer, and when it got to be about two, Lily started rubbing her eyes and yawning. Because we’ve had some epic battles over afternoon naps lately, our next step regarding Lily was unclear, particularly since we were in a unfamiliar place. To be frank, we were all on vacation, and I was loathe to engage in this battle every single day, as was Joe. So I told Lily that she could either go back to the cabin with us for a nap, or go back to the slides and “see boys” (something she’s verbally coveted for several months now – we have a rough adolescence ahead of us). I knew full well what she’d choose; but I also knew that the counselors could take her out for a stroller ride around the camp, during which she’d likely fall asleep.

And that’s precisely what happened. She got a personalized ride to the stables and konked out along the way. Yes, she only slept for about 40 minutes, apparently, but it was better than nothing. Meanwhile, Joe and I read and slept for a couple of hours, then spent the rest of the day with Lily.

Encouraging. Though things started out badly, if this was how the week went, I thought, we’d be in good shape.

And for the most part, it was. Joe participated in a ping pong tournament; I attended yoga classes; we spent time with Lily on the beach nearly every day; both Joe and I signed up for massages; and we slept, read, and ran. In the evenings, there was a night of staff skits, a campfire singalong (see Lily in line to roast her first marshmallow in the video below), a staff/camper volleyball game and softball game, etc. Between these organized activities, and the playground equipment in each camp, and the kids camp programs, the Michigania folks really have done everything humanly possible to take the responsibility off the adults and provide everyone with a good experience.

Yes, there were a couple of rainy days, which made things a bit more challenging; and mealtimes were often trying because of Lily’s pickiness (though on the nice days, the beach grill-out lunches were a dream-come-true in this regard); but one thing she took to well, not surprisingly, was the new soft serve option at the new dining hall.

We did have a bit of a rough patch late in the week. Personally, I think this was partially Lily’s fatigue catching up with her after four days of really short naps – for which I certainly felt partly responsible. Normally, she sleeps anywhere from one to three hours in the early afternoon, but thanks to our wishful, “let’s let the kids’ counselors deal with it” attitude, she’d only been getting brief naps each day. (I’m not sure this could have been avoided; even if we’d insisted she come back to the cabin with us to nap, she’d fight and fight and fight and probably end up only briefly napping there, too. These little things end up getting so complicated.)

Unfortunately, by Wednesday night, Lily became one of those unreasonable, impossible two year olds that make “terrible twos” common parlance. You know. You’re at dinner, and she refuses to eat anything you’ve gathered for her on a tray, but when you put a rejected-by-Lily bite into your own mouth, she throws a fit, insisting that that half-chewed french fry between your teeth is the one thing in this whole world that she wanted. She wants it now, and she will whine and cry and claw at your mouth inexhaustibly, even when you’ve demonstrated that said fry is long gone.

She also wailed about wanting me to carry her, but not sit down – which I can’t do for long these days, since she’s so big – and after a good long while of trying to placate her and snap her out of this mood, Joe yanked her up onto his shoulder and stomped down the steep hill toward the lake. (She’d been screaming and wailing so much that she was disturbing the other families.) 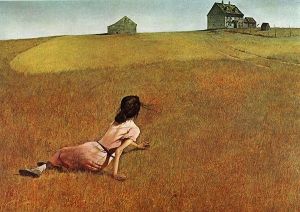 Me waiting for Joe to talk Lily down from a hysterical tantrum while on vacation.

She screeched and reached toward me, yelling “Mommy!” while I just stood there, numb with sadness and embarrassment and helplessness. Joe and Lily descended further, and I thought myself a middle-aged version of the young woman depicted in Wyeth’s “Christina’s World,” frozen in a perpetual state of anticipation.

Yet because Joe’s very whispers seem to carry on the air like a bullhorn, his loud voice boomed around the outdoor picnic tables where people ate from their own dinner trays. In order to make Lily hear him over her own rage, Joe yelled, “You are not going to see Mommy until you stop crying. You need to calm down.”

This went on for several minutes, and I slumped down onto a bench, feeling much like I had on that first awful night of our vacation. When you have a small child, you can leave home, but the potential for great drama is still with you. And because I’m someone who prefers drama on a stage rather than real life, these situations still have the capacity to knock me flat sometimes.

Finally, Lily calmed down enough that Joe brought her back, and she clung to me, whimpering and starting to cry again, while Joe sat down, tired of having to play the villain.

And just when you thought the evening couldn’t get worse, a five year old blond girl approached and said, “I don’t think you should have been that mean.”

“You don’t, huh?” said Joe. “She was out of control and screaming while people are trying to eat. And that’s not right. It’s not fair to everyone else.”

The girl repeated her original statement and flitted off.

Understandably, this bothered Joe. “I’m being told by a five year old that I’m too mean.”

“I wouldn’t take etiquette lessons from that particular little girl,” I sniffed, reminding him that she was the one who, the first night we were here, climbed up the slide that Lily was sitting at the top of, ready to go down; the girl refused to move or even respond to our polite requests, so Lily had to go down a different slide entirely.

Even so, Joe still had a cloud over his head the rest of the night, even when Lily FINALLY snapped out of her funk.

The next morning was more bad news, in that we couldn’t get Lily to eat much of anything, let alone perk up. At first, we thought she was just having a hard time waking up; but she clung to me like a monkey and was strangely lethargic (usually she’s really active), so we spent the morning with her, trying to let her get what she needed from us to get through this funk. The day was nice enough for a beach grill-out, though, so she got her favorite things for lunch, and then seemed to be more herself. Thus encouraged, we took her to the kids camp in the afternoon, which she seemed to want; but when we picked her up, we learned that she’d thrown up shortly before we’d shown up.

We took her to the camp nurse, who didn’t have much to tell us. And although Lily still wasn’t quite her normal self, she didn’t get sick again after that, and she was better the next day, playing on the beach with us all afternoon during a water carnival (sand castle contest, magic rock hunt – she had a blast).

So fortunately, though there were low points, the vacation overall provided us with some great times with Lily, as well as some much-needed rest. Neither Joe nor I got near a computer all week long (a truly wonderful escape), and the only television viewing came when Joe went to a common area to watch the U.S.’s world cup match.

All this gave us a chance to re-connect. Yes, we see each other every day, but when the obligations and technology fall away for a while, and you get to focus completely on each other, it’s a whole different experience.

After all, you leave lots of stuff behind you when you travel; but for better or for worse, you can’t quite ever leave yourselves behind.

One thought on “Vacation II (in which things get better – mostly)”