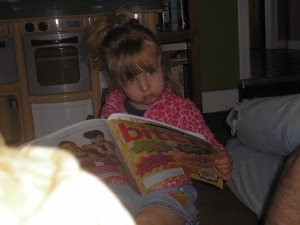 (I'm guessing that Lily is one of Bitch Magazine's youngest readers.)

While Lily was lying on the changing table recently, she lightly patted herself “down there” and said, “That’s my poopie.”

And, well, you know. I’m an educated woman who’s seen “The Vagina Monologues” and everything. So I said, after a short, unthinking pause, “No, that’s your vagina.”

“Jine-ah?” Lily asked, and I repeated the word for her, swallowing back my own residual discomfort with the lexicon of female genitalia. Years and years of feeling ashamed, or just plain unaware, of the ins and outs (so to speak) of your own body don’t simply vanish by way of experiencing feminist plays and essays, after all.

As if to hit this point home even more, I realized after-the-fact that what Lily had been patting, of course, was in fact her labia, not her vagina (patting an internal cavity would indeed be difficult). So despite my intentions to be frank and unashamed about female anatomy from the start with Lily, our first-ever exchange on the topic was a humbling lesson in my own reflexive ignorance.

I’ve vowed to do better, both for Lily and for me. I’ve promised myself to have the words, the accurate, shame-free words, to equip her to know the geography of her own body in a healthy way. Yes, she may, as she grows into an adult, use the silly nicknames like “coochie” and “va-jay-jay,” but as long as she knows the real terms, and feels comfortable with her physical self, I’ll have done my job well – or adequately, I guess.

Yes, I’m disappointed that I kind of botched this inaugural test with Lily. But I’m proud that I at least spoke up, thus working against years and years of repression. It was a positive first step – even if I didn’t get the words quite right.

If only Lily could read my blog. I’m always so much better on “paper,” virtual or otherwise.

Last year, after my mom died, and I learned that The Ann Arbor News, my employer, would be shutting its doors in July – thereby ending the job I’d waited my whole life for – I decided to register, and train, for an women-only mini-sprint triathlon.

Why would I do this arguably frivolous thing instead of updating my resume and researching career options? I wondered that, too. The mere thought of being unemployed filled me with dread, and the specter of depression loomed; yet I also couldn’t bring myself to face it.

I was mentally paralyzed in those months. In some Joan Didion “Magical Thinking” kind of way, I thought that if I avoided dealing with the fact that I had just lost my mother and was about to lose my dream job, then none of it would be real. I wouldn’t allow it to be real.

So the initial basis for my mini-tri registration was probably grief and denial (yay, Midwestern Protestant repression!). But in my defense, I also knew myself well enough to know that I needed to work toward something positive if I was going to get through this awful time intact.

Yes, everyone’s sense of identity is, to some degree, wrapped up in his/her occupation, but that was particularly true for me. Having been one of those college students who never once spoke up in class, so convinced was I that I had nothing of value to add to discussions, I had found that the public act of writing out my thoughts and ideas at the News had provided me with a voice, as well as the means to have conversations with myself in a meaningful way. After finally achieving that, how could I stand to lose it?

And although my mother had struggled with cancer on and off for 14 years, her death was shocking in its swiftness. We’d seen her at Christmas only weeks before, and she had seemed fatigued and not quite herself, but none of us – not even my father, who’d been through all of this with her – had any idea what was coming. My last phone conversation with her was of the breezy, forgettable, “Hope you’re feeling better” variety. I remember little to nothing about it. And then five days later, we were on a plane with then-9-months-old Lily, hoping against hope that my mother would be able to hold on until we got there. She couldn’t, and in some ways, this may have been a blessing. But regardless, just as I wondered who I would be without my job, my writing, I wondered who I would be without my mother – the primary witness to my life, from its beginning, and my longtime companion. And while I was still adjusting to my new motherhood, I lost the person I’d hoped would provide valuable guidance and perspective. END_OF_DOCUMENT_TOKEN_TO_BE_REPLACED